(via Wikipedia)
Archaeological investigations indicate that Santa Cruz Island has been occupied for at least 10,000 years. It was known as Limuw (place of the sea) or Michumash in the Chumash language.[1][4] The people of the ChumashIndian tribe who lived on the island developed a highly complex society dependent on marine harvest, craft specialization and trade with the mainland population.[5] . The Santa Cruz Island Chumash produced shell beads that they used for currency, which formed an important part of the overall Chumash economy. Native villagers had no known contact with Europeans until the 16th and early 17th centuries. Juan Rodríguez Cabrillo, who is credited with the first European exploration of the California coast, observed at least six villages, though he and his crew did not come ashore. Cabrillo named the island San Lucas.

In 1602, Sebastián Vizcaíno led the last Spanish expedition to California. His map named Santa Cruz Island theIsla de Gente Barbuda (island of the bearded people). Between 1602 and 1769 there was no recorded European contact with the island. Finally, in 1769, the land-and-sea expedition of Don Gaspar de Portolàreached Santa Cruz Island. Traveling with him were Father Juan González Vizcaíno and Father Francisco Palóu. Father Palóu wrote of Father Vizcaíno’s visit to the Santa Cruz village of Xaxas that the missionaries on ship went ashore and “they were well received by the heathen and presented with fish, in return for which the Indians were given some strings of beads.” The island was considered for establishment of a Catholic mission to serve the large Chumash population. When Mission San Buenaventura was founded across the channel in 1782, it commenced the slow religious conversion of the Santa Cruz Chumash. In 1822, the last of the Chumash left the island for mainland California.[1]

With Mexico’s independence from Spain in 1821, the Mexican government asserted its control over California. In an effort to increase the Mexican presence, the government began sending convicted criminals to populate many areas. Around 40 prisoners were sent to Santa Barbara where, upon arrival, they were sent to Santa Cruz Island. They lived for a short time in an area now known as Prisoners Harbor.[1]

Governor Juan Alvarado made a Mexican land grant of the Island of Santa Cruz to his aide Captain Andrés Castillero in 1839. When California became a state in 1850, the United States government, through the Treaty of Guadalupe Hidalgo, required that land previously granted by Spanish and Mexican governments be proved before the Board of Land Commissioners. A claim was filed with the Land Commission in 1852,[6] confirmed by the US Supreme Court[7] and the grant was patented to Andrés Castillero in 1867.[8] For twelve years Castillero’s claim to Santa Cruz Island was disputed, even after his property had been sold. During Castillero’s ownership, Dr. James B. Shaw, an English physician, acted as manager of the island. He built the island’s first ranch house by 1855 and is thought to have brought the first French Merino sheep to the island.[1] 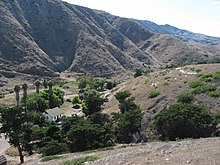 Castillero sold the island to William Barron, a San Francisco businessman and co-owner of the company Barron, Forbes & Co., in 1857. During the twelve years that Barron owned the island, Dr. Shaw continued to manage it as superintendent and was charged by Barron to expand the sheep ranching operation begun during the Castillero era. The Civil War significantly increased the demand for wool and by 1864 some 24,000 sheep grazed the hills and valleys of Santa Cruz Island.[1]

Shaw’s island sheep ranch was well known by 1869, the year he left Santa Cruz. He imported cattle, horses, and sheep to the island and erected one of the earliest wharves along the California coast at Prisoners Harbor by 1869. He built corrals and houses for himself and his employees and expanded the road system. Shaw was the first rancher to ship sheep to San Francisco by steamer, some selling at $30 per animal. When Barron sold the island in 1869 to ten investors from San Francisco for $150,000, Shaw left for San Francisco and Los Alamos where he continued ranching. At that time, the gross proceeds from the ranch on Santa Cruz Island were supposedly $50,000.[1]

One of the investors, Justinian Caire, was a French immigrant and founder of a successful San Francisco hardware business that sold equipment to miners. By the late 1880s Caire had acquired all of the shares of the Santa Cruz Island Company which he and his colleagues had founded in 1869. His sons continued a successful livestock, winemaking[9][page needed] and ranching industry on the island for many years after his death in 1897.[1]

Beginning in 1910 an extended and complicated litigation was brought by Caire’s two married daughters against their mother and four siblings. This resulted in the division of the island and the forced sale of most of it in 1937. The litigants, who had instigated the legal actions led by in-law Ambrose Gherini, retained 6,000 acres (2,428 ha) on the east end of the island, on which they continued the sheep ranching operation. To pay their legal costs,[9][page needed] the majority of Caire’s descendants were compelled to sell the remaining 90 percent of the island to Los Angeles oilman Edwin Stanton in 1937.[1]

Edwin Stanton’s purchase of the major part of Santa Cruz Island brought a major shift in agricultural production on the island. After trying for a short time to continue the sheep operation, he decided to switch to beef production. At the time, the beef industry in California was growing rapidly, with Santa Barbara County among the top ten beef producers in the state.[1] Edwin Stanton’s ranch on Santa Cruz Island saw changes that reflected the evolution of cattle ranching in a working landscape. While retaining most of the 19th century structures dating from the Caire period, Stanton constructed a few buildings to meet the needs of his cattle ranch, the most notable of which is Rancho del Norte on the isthmus. Pasture fencing and corrals were altered to suit the cattle operation and an extensive water system was added to provide water to the cattle.[1]

The Gherini family, descendents of Justinian Caire’s two daughters continued their sheep ranching operations on the east end of Santa Cruz Island until 1984, using Scorpion Ranch as their base. They managed the island with resident managers and laborers and often worked as a family during shearing and during the summer. Production dropped during the 1970s and 80s and the expense of ranching on a remote island rose. With Edwin Stanton’s death in 1964, his widow and son, Carey, re-incorporated the Santa Cruz Island Company and continued the cattle operations on the island. Carey Stanton died unexpectedly in 1987 at the ranch and was buried in the family plot in the island chapel yard at the Main Ranch. The real property passed to The Nature Conservancy through a prior agreement that Carey Stanton had established with the non-profit organization.[11] The Nature Conservancy rapidly liquidated the cattle operation and ended the ranching era on the island.[1] [9][page needed]

Santa Cruz was a base for otter hunters, fishermen, and smugglers. The Channel Islands often provided smugglers and bootleggers with convenient yet isolated hideaways where they could store their goods. One such area is known today as Smugglers Cove.[1]

George Nidever recalled hunting otter at Santa Cruz in the winter of 1835-1836. Working from a base camp at Santa Rosa Island, he and two others obtained 60 skins that season. Fishermen encamped on the island, trading fish for other goods from passing boats.[1]

The United States military began to use Santa Cruz Island during World War II, and has constructed and maintained strategic installations on the island. Like all of the Channel Islands, Santa Cruz Island was used as an early warning outpost for observing enemy planes and ships during World War II. During the Cold War a communications station was installed as a part of the Pacific Missile Range Facility. This station remains in operation, although not at the levels of use seen in the 1950s and 1960s.[1] 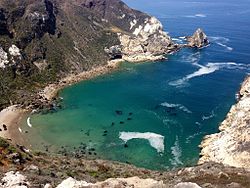 In 1936 the Caire family reportedly offered their 90% of the island for $750,000 to the state of California for use as a state or federal park. Nothing came of this proposal, and the property was sold to Edwin Stanton. Stanton’s son and heir was not interested in a government purchase of his island. He took steps to avoid such events by forging an agreement with The Nature Conservancy, and the property was transferred to the organization upon his death. Although Santa Cruz Island is included within the boundaries of Channel Islands National Park, The Nature Conservancy portion of the island does not belong to the park. A transfer of 8,500 acres (34 km2) from the Nature Conservancy to the park was completed in 2000.[1]

Channel Islands National Park owns and operates approximately 24% of Santa Cruz Island. The remaining land is managed by a combination of organizations which includes The Nature Conservancy, the University of California Natural Reserve System, and the Santa Cruz Island Foundation. Known as Santa Cruz Island Reserve, this portion of the island facilitates scientific research and education on the island. The reserve and its staff provides accommodations for visiting students and researchers.